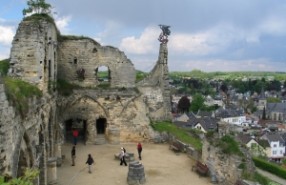 The rich history of the Middle Ages lives again with a visit to the castle ruins in Valkenburg aan de Geul, and its history dating back to the 11th century! Towers jut skyward from the ruins of the once so imposing castle, the Netherlands’ only hilltop castle, looking out over the little fortress town below.

Visiting these historic remains of Valkenburg Castle, you can wander from the Great Hall to the defensive towers, from the dungeon to the old chapel, and from the artillery room to the subterranean escape passages to the Velvet Cave.

Relive the stirring history of the many sieges, destructions and dominions of knights such as Walram de Rosse, Gosewijn, and the Dukes of Brabant, until the final destruction of the castle on 10 December 1672 at the hands of Stadtholder Willem III.The remains of the castle ruins have stood as a quiet reminder of the proud fortress here at this prominent place in the Geul Valley ever since.

Closely connected with the rich history of the castle ruin is the Velvet Cave, the network of passageways beneath the Castle Ruins.
The Velvet Cave probably dates from the 11th or 12th century.

Marl was mined from the cave by block breakers for use as a building stone in the construction of edifices like Valkenburg Castle. The result of this marlstone mining is an extensive labyrinth of old and rugged passageways.

In times of siege, the secret passageways, which were only discovered in 1937, allowed the knights and their footmen to escape the castle and attack the enemy from behind or secretly bring supplies in. One legend tells of the Brabanders (natives of Brabant) who, laying siege to Valkenburg, could not understand why celebrations were still being held inside the castle walls even after a long period of siege. Little did they know that the troops inside were being supplied via the secret passageways… from Brabant, where the siege armies would soon discover that their lands had been plundered in their absence!

The Velvet Cave has many secrets. Discover a treasure trove of impressive wall murals, inscriptions, strange sculptures in the soft marlstone walls and a romantic chapel dating from the French period (18th century).

In the Second World War, during the German occupation, the cave served as a hideout for the people of Valkenburg and for the American troops.

Nice and cool in the summer and wonderfully warm in the winter, the Velvet Cave is permanent 12 degrees Celcius a year-round. Please dress accordingly.